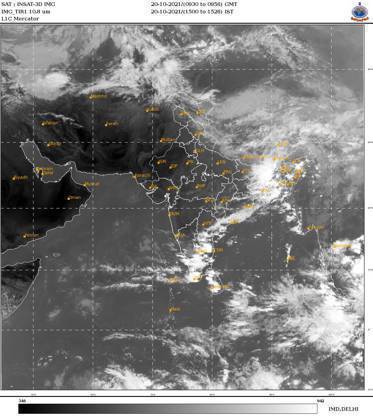 Unhappiness of rain God continues as forecast of heavy to very heavy rainfall have been issued by Indian Meteorological Department(IMD) .

Many lives were lost and huge economic loss was witnessed.

In higher reaches of Himalaya in Uttrakhand and Himachal Pradesh witnessed snowfall also.In some parts of Lahaul & Spiti valley and Kinnaur snowfall upto 1.5 ft was witnessed.

The Prime Minister, Shri Narendra Modi in a tweet has expressed grief over the loss of human lives due to heavy rainfall in parts of Uttarakhand.

In a tweet, the Prime Minister Shri Narendra Modi said;

"I am anguished by the loss of lives due to heavy rainfall in parts of Uttarakhand. May the injured recover soon. Rescue operations are underway to help those affected. I pray for everyone’s safety and well-being."

People living in the areas for which forecast has been issued are advised to avoid going out.Those living in Himalayan region are advised to take adequate precautions against landslides and associated problems related with heavy rainfall.