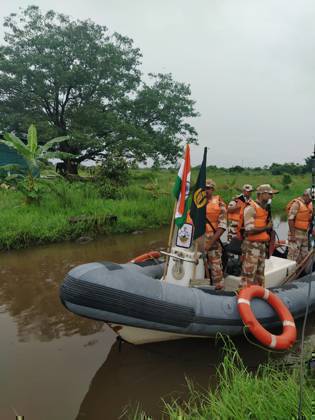 Commandant Water Wing Dr Deepak Kumar Pandey, highlighted the role of water wing in conflict scenario and security of water bodies near international borders.He elaborated upon the role of Water Wing in security of Pegong Tso, Indus river, Chang Chenmo river, and Shyok river in Laddakh and many rivers like Brahmaputra etc in North Eastern India.

On the occasion of Raising Day an excellent display of its professional competence was organised by Water Wing.

In one demonstration, the operation of patrolling in rivers was displayed.

In other demonstration, a highly difficult and specialised action of rescue of a drowning victim and his evacuation through boat and ambulance was shown.

Water Wing of ITBP was established to do patrolling in water bodies, provide logistic support to BOP connected with water bodies, to help in disaster management during water based disasters, and to provide training to personnel of ITBP in water based operations.

Water Wing is a pan-India organization with role envisaged in all parts of Himalayas and adjoining alluvial plains of Ganga, Brahmaputra, Indus and others rivers.

Water Wing has its headquarter at Tezpur ,Assam.

ITBP is guarding 3384 kms of I border from Karakoram in Laddakh to Jachep La in Arunachal Pradesh.It is considered one of the best mountain security force in the world.