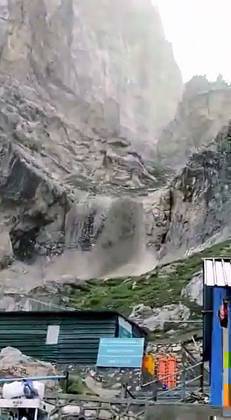 A massive cloud burst near Amarnath cave has caused loss of more than 13 lives in Jammu Kashmir region of India. This cloud burst had occurred just near the cave.

Presently, lakhs of Hindus are visiting holy cave of Amarnath.A massive tent town is established near the base of the holy cave.

This cloud burst has caused huge flow of debris and water in the left side of the cave. The lower part of the cave, where the tent town is established , is badly damaged

It is reported that more than 25 tents have been swept away and many visitors are injured.

An eyewitness said "The water is still flowing through the channel where the cloudburst occurred and it is coming with huge force to the tented area."

Eyewitnesses reported that the number of victims may increase.

The incident occurred at about 5:30 p.m. and it was raining.

Many pilgrims were taking shelter in tents.

The Search and rescue operation was hampered due to rain and darkness.

The water is stilll flowing at high speed through the tent colony.

It is reported that ITBP, NDRF , and Jammu and Kashmir police have immediately started search and rescue operation in the area.

Spokesperson of ITBP said" More than 2 companies of ITBP are involved in Search and Rescue operation.Many teams of other security agencies are helping in rescue operation."

The debris has also blocked routes to the Amarnath cave.

It is reported that an area about a kilometre is badly damaged because of this cloudburst.

Rescue operation is facing dangers of further rains, which may worsen the situation.

Earlier a rainfall was also witnessed after the incident which aggravated the damage.

The Amarnath Yatra has been immediately stopped.It will be resumed only after the area has been made safe by the disaster management agency and local administration.

Head of the Amarnath Yatra Shrine Board, Governor of Jammu and Kashmir and other senior officials are closely monitoring the search and rescue operation.

Prime Minister of India Mr Narendra Modi has expressed deep sorrow and sympathy towards the victims.

All efforts are being made to evacuate maximum numbers of victims from the incident site. Helicopters are also being used in search and rescue operation. Kashmir valley is affected by terrorism.Each year the Amarnath yatra is conducted under tight vigil of security forces .

The agencies involved in search and rescue operation need to take care of threat from militants groups which try to disturb it.

Security experts say that terrorists may take advantage of disaster situation at the Amarnath site. They have tried to stop the yatra in the past also.

There have been several attacks on Amarnath Yatra in the past.

Lots of Hindus visit holt Amarnath cave where a natural ice Shivling is formed every year for few months.

This miracle of God is witnessed by millions of Hindus every year.

It is said that Amarnath cave is one of the Holiest site of Hindu religion in India.

Emergency Manager magazine is closely monitoring the situation.It will keep our readers updated.